Particle production based on supercritical carbon dioxide (scCO2) is efficient, inexpensive, and ecological [1]. These kinds of bottom-up technologies form particles by re-crystallization. CO2 is the most common solvent in supercritical processes, since its critical temperature and pressure are relatively low, 74 bar and 31°C [2]. Furthermore, CO2 is ‘Generally Recognized As Safe’ (GRAS) by FDA; it is neither flammable nor toxic.

Particle production techniques employing scCO2 use scCO2 as solvent, as solute or as anti-solvent [3]. Rapid Expansion of Supercritical Solutions (RESS) is a solvent- and excipient-free production method [4]. It has been mainly used to produce micron and submicron particles in pharmaceutics.

The processes using scCO2 as a solvent have been modified by changing process parameters. However, since invented, particle production using scCO2 as solvent is based on rapidly decreasing the pressure [5]. The rapid decrease of pressure has been considered essential for formation of small particles.

Our experiments indicate that nanoscale particles can be produced in opposite conditions to the existing RESS technique: slow depressurization and with low degree of supersaturation, using a method called Controlled Expansion of Supercritical Solution (CESS). Experimental apparatus was built for CESS experiments (Figure 1). CESS differs from RESS  in many respects and employs controlled mass transfer, controlled flow, controlled pressure reduction, and finally particle collection in dry ice (Table 1). The core of the technology is to allow larger initial nuclei size and particle growth by condensation. This avoids the variation in temperature, pressure, and density, as well as the particle growth by coagulation. 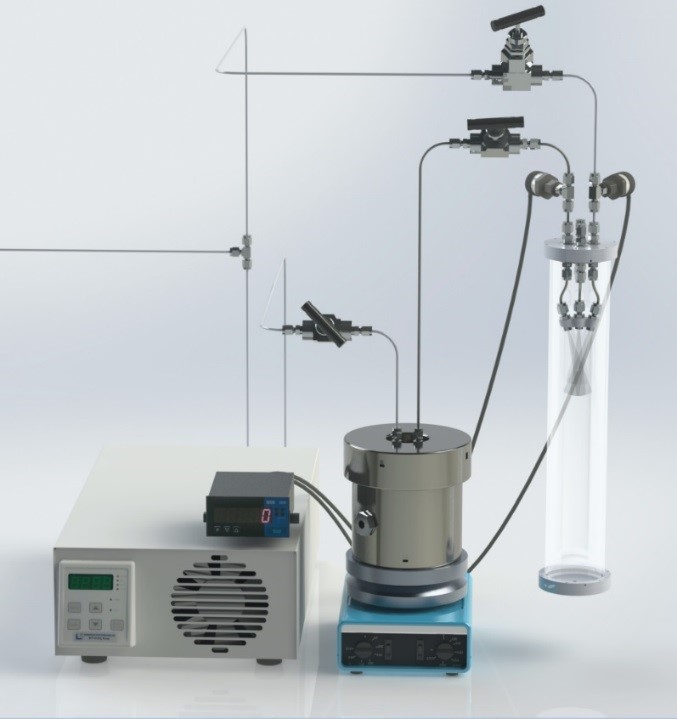 In RESS the supercritical solution is expanded through a nozzle and the subsequent rapid decrease in solvent density reduces the solvent power [4]. Particles are generated as solute precipitates and the particle formation, the creation of a single spherical particle of radius r, can be understood using the reduced Gibbs energy in a closed system (Equation 1) [6].

In RESS, the ratio of pre-expansion to post-expansion pressures exceeds 10, the ejection velocity is sonic at the nozzle, and later supersonic [10]. The supersonic free jet ends with a Mach disk beyond which the velocities again are subsonic.  Particle precipitation in the RESS process mainly takes place after the nozzle exit and in the shear layer of the jet [11]. The particle concentration is highest at the Mach disk and the main mechanism for particle growth is coagulation in the subsonic free jet. The flow in the collection chamber of a RESS system is often rather chaotic.

In CESS the focus is on achieving lower degrees of supersaturation, slow velocity and limited mass transfer. The ratio of pressure before and after each pressure drop is kept below ten. This prevents the flow speed beyond the nozzle from reaching sonic velocity, and thus there is neither a Mach disk nor density differences in the collection chamber as in the RESS process. Consequently, particle growth by coagulation is reduced. Particles form under mild conditions prior to the exit nozzle and grow mainly by condensation. Particle formation and growth is thus much slower than in RESS and the particles form in a controlled environment.

The CESS process itself is more robust, stable, and reproducible, than the RESS process; the pressure and flow as well as the production rate are constant and the environment for particle formation between processes is identical. In contrast to RESS, small changes in the initial pressure and temperature do not affect the end-product. The CESS process produces small particles successfully without use of co-solvents, excipients, or collection into aqueous media.

The pressure, flow, and the rate of solid dispersion formation within the collection chamber are constant. Hence the collection and particle production processes are stable. The robustness, stability, and reproducibility of the process were proven by preparing 3 batches of the same product. The SEM images obtained from different parts of each sample indicate that the nanoparticles prepared from piroxicam were monodisperse in size and shape. The average nanoparticle diameter was 176 nm ± 53 nm, the batches 169 ± 48 nm (n=300), 179 nm ± 54 nm (n=300), and 179 nm ± 67 nm (n=300) (Figure 2). The particle size of the bulk was 7106 ± 5639 nm (n=300).

The article is based on the publication “Controlled Expansion of Supercritical Solution (CESS): a robust method to produce pure drug nanoparticles with narrow size-distribution” (J Pharm Sci 2016; 105(8); 2293-2297) by Jenni Pessi, Ilkka Lassila, Antti Meriläinen, Heikki Räikkönen, Edward Hæggström and JoukoYliruusi. Jenni Pessi, Heikki Räikkönen and JoukoYliruusi are from the Formulation and Industrial Pharmacy Unit of Division of Pharmaceutical Chemistry and Technology, Faculty of Pharmacy, University of Helsinki. Ilkka Lassila, Antti Meriläinen and Edward Hæggström are from the Division of Material Physics, Department of Physics, University of Helsinki.

The FIP research unit focuses on the translation of a drug molecule into a medicine. The aim is to maximise the quality and feasibility of the medicine by understanding all the factors that affect product development, including pharmaceutical material properties, processing, stability, and end user needs. Research focuses of FIP are solid state engineering, molecular based formulation science, processing technology, and industrial pharmacy research.